Why an elephant has breast, not an udder? --- A story from an elder

What a local elder has to say about the location of elephant's breast? Usually, many quadrupeds have their udders located in between their back limbs; however, this is not true to the elephant. The female elephant breast is located on its chest like we human. Here is a story retold by an elder man, meme Sherab, 80 from Bangtsho, Dewathang about the location of elephant's breast.
Once, there lived a hunter. Every day, he hunts and offers meat on his shrine in a bamboo container. One day as usual, when he returned back from the forest, he found his room well cleaned and arranged. He was astonished to see his room condition and wondered, who uninvited guest, could have visited him. Next day, as usual, he went off to hunt. Right after the sunset in the evening, when he returned home, it was another surprise. His mud stove was on fire with a crowd of dried firewood gathered through the stove mouth. He wondered again, who could have made a fire in his stove. On the third day, when he came back from the jungle, he found delicious meals cooked, ready for him to feed on. This time, he definitely suspected that there is somebody, doing all these works in his absence. 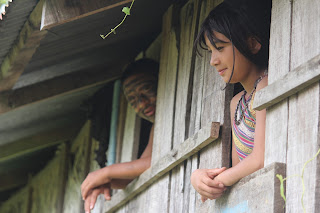 He had an idea! Next morning, he pretended to go off for a hunt but, he came back to watch what was going on in his house. As he watched from behind the bush, a beautiful woman emerged out of a bamboo offering container, which was kept on the shrine. She uncovered herself from a skin and immediately started to work in his kitchen. Without delay, the hunter ran as quickly as possible closer to skin shedded, he grabbed her skin and was about to burn it in the fire. The woman shouted, don’t burn it! Throw some part of it up in the ceiling, some of it down on the ground, and some under the house. The hunter followed her instruction. Instantly, the part of the skin on the ceiling turned into seeds, the part on the ground turned into kitchen utensils, and the part under the house turned into animals. After that, the hunter and the beautiful woman eventually got married and lived happily together for many years. 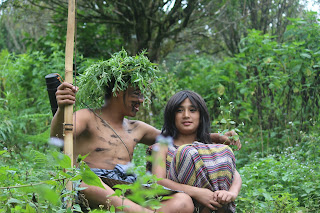 One day, the couple had quarrel out of some misunderstandings. The hunter scolded his wife. He said, ‘‘you are a woman, who is transformed out of animal flesh''. The statement deeply disappointed her. She felt so embarrassed and sad. She walked far-far away from their house and never returned home. The hunter worried as the wife did not return home. He came out looking for her in the forest. Far in the forest, he saw his wife’s cloth lying on the ground and herself transformed into an elephant. The hunter with deep regret returned home alone.


Meme Sherab said ‘‘this is why female elephants (cows) have their breasts on the chest like we humans do.’’
Posted by Lhomon Education at 3:06 AM 1 comment:

The legendary Tshongpon Norbu Zangpo and his riding Rhino

Meme Sherab 84, a resident of Bangtsho, Dewathang, narrated the following story for LME students on his visit as a guest speaker to the class. Besides, he talked about barter system, which existed as a common practice of trading within a small village and across wider communities then. Moreover, he shared, that the trade was not only with the exchange of goods, but also services on day to day basis.


Once, the Rhinosaur was believed to be merchant Norbu Zangpo’s riding animal when he travelled for his business in India and Tibet through Bhutan.
One of the routes merchant Zangpo took was via Dewathang to Assam in India. Consequently, today a tall and big tree growing right at the beginning of Dewathang town is his legacy, believed to be from his walking stick and few meters away, is his cooking stove, the tri-stone in a circle.
Those days, all the merchants from Bhutan and Tibet, who took the route, circumambulate the tree and the stove as a sign of respect and devotion for merchant Zangpo. Even to these days, the residents of the town look after the area and offer incense often. 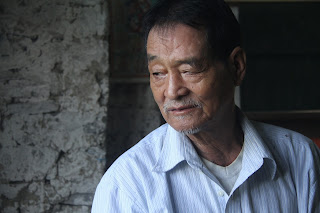 It was believed that one day, as the merchant travelled for his regular business, his riding animal fled away to Manas, the South Central foothills of Bhutan. So, the merchant Zangpo became very angry. Subsequently, it was believed, that he subdued the Rhino and prohibited its entrance to the South East of Bhutan. That is why today, we don’t see any Rhino in the south-east region of Bhutan.
Meme Sherab has asked us to closely study the skin pattern of Rhino. The saddle, which was used by Zangpo on Rhino then, can be seen these days on its skin pattern. It was believed, that the Rhino fled away with the saddle on its back.
Posted by Lhomon Education at 7:28 AM 2 comments: