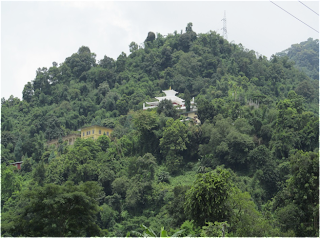 Those travelling from Trashigang to Samdrup Jongkhar, Dewathang cannot be missed, so familiar a place, a pleasant reminder for weary travelers that the business hub Samdrup Jongkhar is not too far from this point on. I did know the small monastery that existed above this small market place but never visited before. Those days, the only noticeable objects were white prayer flags. From this same bus stop, now one can see the magnificent temple surrounded by cluster of buildings against the lush green hillock—Chokyi Gyatso Institute (CGI).
CGI—I came to know about this unfamiliar institute in an unfamiliar curriculum “The Druk 3020 Curriculum” that I came across while Googling for some information on meditation and mind training, one of the pathways for Educating for Gross National Happiness (GNH). Out of curiosity I started reading this curriculum and that was it—it gave me not only the information I was seeking but also some profound thoughts and inspiration about holistic education, the theme I was working on for my doctoral dissertation. In fact, this changed the course of my dissertation proposal. I decided to trace the curriculum to its founding principles and place, where it is being implemented and that is how I landed at CGI. 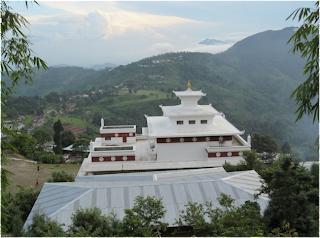 I arrived at CGI on Sunday June 15, 2013 at around 3:30pm. Dawa my co-teacher received me and ushered to the guest house. After I organized my things and taking a shower, I came out to get a better view of the institute campus. The first thing that captivated my attention was the sight of the main temple construction in its splendid architecture.  The final details are not fully done as yet, still, its unique feature such as the four Victory Banners on the second floor top corners stand prominent and auspicious. As I circumambulated below, it gave me a sense of being blessed. A sense of spiritual energy was around and I experienced peace and tranquil that prevails. As I walked little further down I couldn’t help but stop and admire the panoramic view across overlooking Dewathang market. The aerial view of Dewathang looked much more different than those familiar marketplaces by the highway. After standing spellbound for a while I called it for the day. 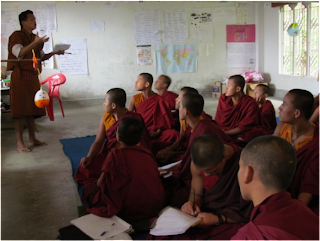 Next day I joined Dawa to observe his class.  After he introduced me, the class began by reciting the Heart Sutra.  This was my first time hearing the Heart Sutra being recited in English—quite unusual but impressive. With much stress on some specific words, most read aloud and all seemed excited reciting in English. This was followed by few minutes of meditation.  Meditation is in fact one of the main focuses of my study, so I pay full attention to see how it enhances learning, especially in receiving information and meditating (analyzing) on it to realize its deeper meaning, intent, or implications in  order to carry out the necessary action. To be able to see such outcomes, much more intense interactions will be required which will be carried out in teaching the next unit “Air and Space.” Following are my prior observations over the first ten days or so.Eating with Khenpos and Lams in the commons, I realized after few days that there was not much variation in what they eat—breakfast, lunch, and dinner all rice all the time and the curry would be mostly potatoes. Not that I didn’t like the taste of the food but there was no balanced diet. In my casual conversation with Dawa one evening after dinner I mentioned, it will be nice to have chapatti (Indian flatbread) once in a while for lunch or dinner and that breakfast could be served fried rice mixed with soaked Chana (Chickpea) as it contains high protein. These items just popped up in my mind from my memories of dining in college cafeteria while studying in India where chana prepared in various ways were often served as one of the balanced diets. I didn’t know that couple of students from our class overheard our conversation. They have been waiting next room to clean the kitchen after we were done as it was there turn to cook. To our surprise next day, dinner was served with chapatti and the following breakfast with fried rice mixed with soaked chana. Considering this act from one’s students, I thought it was a significant gesture.  Unless they gave some goods thoughts over what they overheard, they wouldn’t have done what they did. Such kind of transformation is what I wish to see in students from what they hear in classrooms. 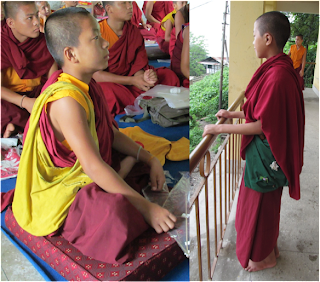 Likewise, another immediate transformation I have seen in students was after they had a session on Zero Waste management from one of The Samdrup Jongkhar Initiative staffs. To reduce waste, reuse and recycle was the message. That session was specifically on how to reuse waste, for which various examples such as how to make a T-Shirt Bag, Umbrella Cushion, and Plastic Broom were demonstrated. The very next day I saw at least half a dozen of them carrying the t-shirt bag they made out of their old t-shirts. They found this idea handy as many of them had old t-shirts not used. I saw many of them use their t-shirt bags for carrying plates and cups and other play items during the breaks. Few of them used their t-shirt bags for carrying classroom materials as well.
For one boy he didn’t just want to reuse the reuse ideas demonstrated in the class, instead, he demonstrated his own innovation. When rest were working on the reuse ideas just demonstrated, he had walked to a heap of broken electrical appliances and picked part of a broken fan. I saw only when he was nailing it hard with a piece of plank. He had no proper tool whatsoever. Next moment he walked into the classroom using it as an       Incense Burner. He purified our classroom few times by burning Sang (incene). Later when I didn’t see him use it, I asked where it is. He said one of the Khenpos liked it so he gave it to him. 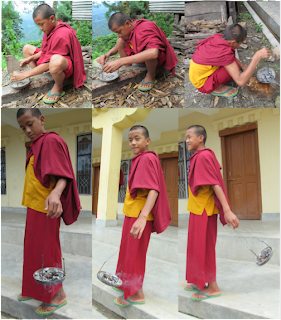 The overall impression of CGI for the first ten days or so of my stay is impressive. Of course as an educator, my interest or concern lie in the learning environment—inclusive and student friendly conducive for creativity and self-expression abided by mutual respect and harmony, students and teachers alike, a learning community—a Sangha. Despite advocacy for such ideals, learning is often dominated by fear, wariness, and concern for certain end result as opposed to learning as a process, fun, and wonder. For such ideals to take root in a learning community, the foremost prerequisite I believe is the mutual harmony—trust, care, and concern for each other, for nothing works out without certain trust. I think CGI has established this aspect of community development. The young monks are as comfortable with any other senior monk. They respect each other and I see that common harmony amongst them. For example, it is fun to watch the little monks amongst the seniors play football. There is no age bar amongst them and all seem to enjoy each other’s company. This sort of cordial atmosphere is good especially for the young ones. Unless they have personal problems, the learning environment at CGI is quite conducive and I hope to see them perform well in their studies.

Yang Gyeltshen
Posted by Lhomon Education at 9:25 AM No comments: