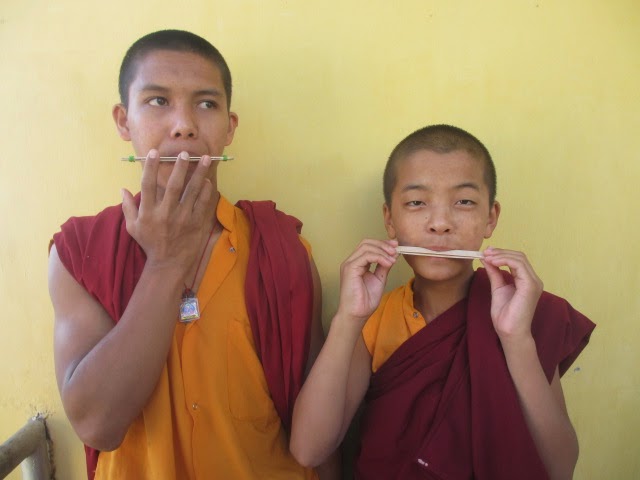 If you pick a blade of grass or a leaf, stretched it in between your fingers or thumbs, and blow into the gap you will hear a high pitch sound. A lot of our students have had played with this effect. The working of a sound sandwich instrument, which can be made using simple items like craft sticks, a straw, one wide rubber band, two smaller and a narrow rubber band is no different in working as a blade of grass sandwiched between fingers and thumbs.
How to make a sound sandwich?
Stretch a wide rubber band length-wise over one of the craft sticks, and cut two pieces of straw, each about an inch to 1 ½ inches (2.5 to 3.8 cm) in length.
Put one of the small straw pieces under the wide rubber band, about a third of the way up from one end of the stick.
Take the second craft stick and place it on top of the first one, wrap one of the smaller rubber bands around the end of the stick a few times, about ½ inch (1.25 cm) from the end, on the same side where you placed the straw.
Make sure the rubber band pinches the two sticks tightly together. Take the second small piece of straw and place it between the two craft sticks, at the opposite end. This time, though, place the straw on top of the thick rubber band, so it sits just under the top craft stick. Wrap the second small rubber band around the loose end of the stick, about ½ inch (1.25 cm) from the end. When you are done, both ends should be pinched together and there should be a small space between the two craft sticks.
When your sound sandwich is complete, put your mouth in the middle, as if playing a harmonica, and blow. Notice that you can make different sounds by blowing through different areas of the instrument, blowing harder or softer, or by moving the straw closer together or farther apart.
What’s going on?
When you blow into the Sound Sandwich, you make the large rubber band vibrate, and that vibration produces sound. Long, massive objects vibrate slowly and produce low pitched sounds; shorter, less massive objects vibrate quickly and produce high-pitched sounds. The tension of a rubber band also will change its pitch: higher tension leads to higher-pitched resonance.
Reference: Exploratorium Teacher Institute (2009). The Exploratotrium Science Snackbook: cook up over 100 hands on science exhibits from everyday materials (revised edition). Robert J. Semper: United States of America.

Posted by Lhomon Education at 8:36 AM No comments: 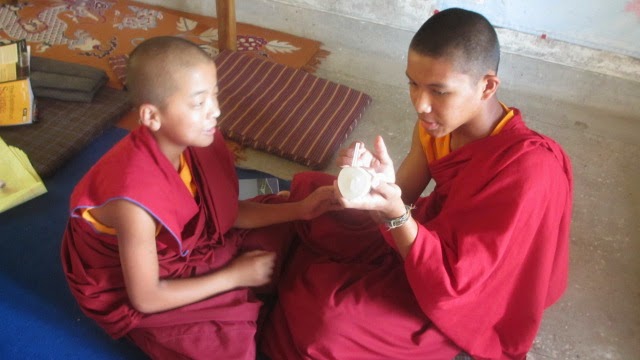 The PET (Polyethylene terephthalate, the plastic found in most platic bottles) bottle Membranophone is fun to make and even more fun to play. Using simple materials like a clean empty plastic bottle, a balloon, a rubber band, a straw, and A4 size paper we can make and play with one. This instrument produces sound from a vibrating stretched membrane or balloon.
How to make:
Get a PET bottle and measure down about 3 inches (7.5 cm) from the top of the bottle. Using scissors, cut along the measured line. Make sure you cut evenly along the edge. Trim off any bumpy spots and recycle the bottom of the bottle. You will need the top half of the bottle to work with. Take out a punching machine and punch a hole near the cut edge of the top half bottle as far as you can get it. Put the straw through the hole to test it for size. It should be a tight fit. If the hole isn’t large enough for the diameter of the straw, re-punch in nearly the same spot to widen the hole a bit. Cut the neck off the balloon to form a sheet of elastic material- a membrane. Stretch the membrane over the hand cut opening of the bottle, making sure that the hole you punched in the side does not get hidden by excess material. Attach the membrane to the bottle with a rubber band. Wrap the rubber band around the bottle several times, making sure that the membrane is taut. Twist the cap off the bottle and set it aside. Roll a piece of A4 size paper into a tube, making it as tight and straight as possible. Put the rolled up tube into the neck of the bottle, where the cap had been. Let go of the tube when it barely touches the bottom of the membrane. It should fit securely in the hole. Tape it to the neck of the bottle so it stays in place. Insert the straw into the punched hole on the side of the bottle, and you’re ready to play.
Now that your instrument is ready, simply blow into the straw on the side of the bottle and your pet bottle Membranophone should play.

What’s going on?
As you blow into the straw, you create pressure in the space between the outer wall of the paper tube and the inner wall of the water bottle. That pressure forces the membrane to rise, allowing air to flow into the top of the tube and escape out the bottom.
As the air escapes, the membrane returns to its position. But as you continue blowing air into the instrument, you force the membrane to rapidly rise and fall, over and over again. If you place your finger over the top of the membrane, you can feel it vibrate. These vibrations produce sound.

The Exploratotrium Science Snackbook: cook up over 100 hands on science exhibits from everyday materials (revised edition). Robert J. Semper: United States of America.
Posted by Lhomon Education at 1:17 AM No comments:

The sound and straw 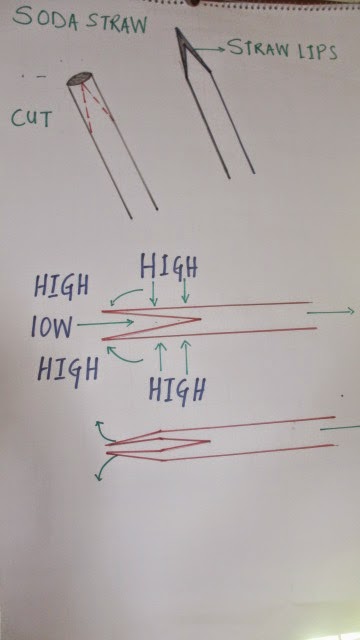 By cutting the two lips of a soda straw, flattening the end, and blowing with just the right pressure, we can make sounds vibrate in the straw.
Flatten one end of the straw by sticking the end in the mouth, biting down with teeth, and pulling it out. Do this for several times to make flexible, flat-ended straw. Cut equal pieces from each side of the flat-ended so that straw has two lips at the end. Put the straw in your mouth and blow into the straw. You will probably have to experiment with blowing harder and softer while biting down with different amounts of pressure until you make the straw sing.
The monks here at CGI make straw reeds in same way to use it with Gyaling. Gyaling literally means "Indian trumpet" and is used during the monastery puja (chanting and prayer) and is associated with peaceful deities. All the monks know how to make and use this simple straw reed. Normally when they make them the reeds are shorter in length and can produce high pitch sounds. The reed goes on top of the Gyaling to make it sing.
So, the question we asked our class was ‘’What makes the straw reed produce sound?’’ To this question, the 20 students have responded with a few one-word guesses- air, pressure, vibration, high, low, hole etc. They were some pretty exciting responses. In fact, all the words that can explain the working of the straw reeds were spoken by them.
With supporting responses from the students, it was quite convenient for me to discuss the working of the reeds- when we blow through the straw, there is high pressure in your mouth. As air rushes through the straw, the pressure in the straw drops, and the high pressure outside the straw pushes the sides of the reed inward, closing off the flow. The pressure then builds inside the straw and pops the reed open again. This causes the vibration of the straw lips. When the reed vibrates at just the right frequency, there we hear loud, buzzing notes.


This is not only a good lesson on acoustic physics but also a fun way to reuse a straw.
Posted by Lhomon Education at 4:07 AM No comments: